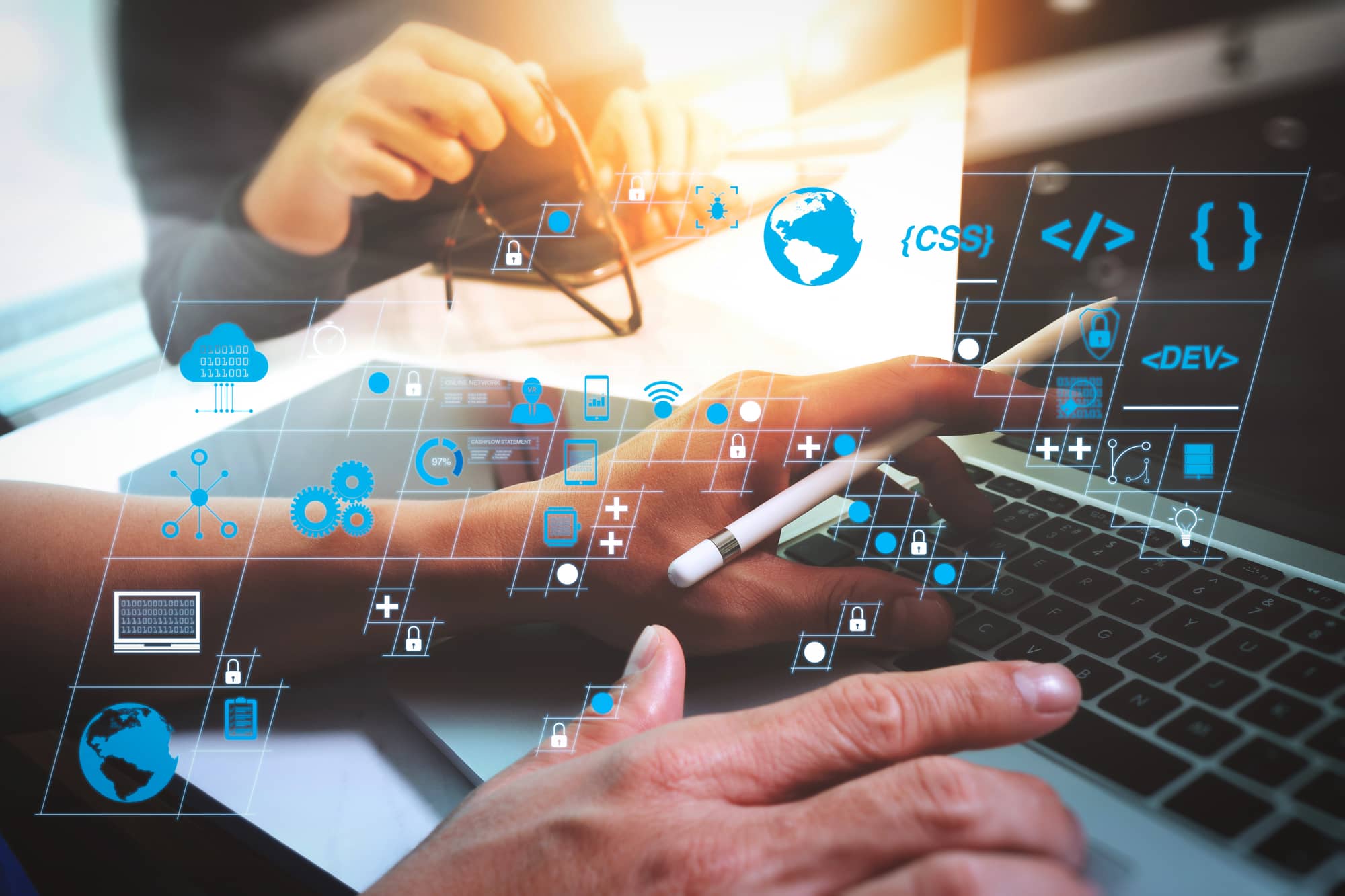 Software development and web development are two closely related spheres. Yet, a line of difference distinguishes the two. The scope of work, prospects, and work domains are quite different for each of these. The pay scale, requirements, and educational perspectives are also quite different. Let us examine web developer vs software developer and explore the array of significant differences between them to have a clear, in-depth understanding.

What do You Mean by a Web Developer and What is a Software Developer?

Web developers are mostly designers who create various internet applications. They are software engineers or IT Professionals usually who understand the different computer languages. Web developers’ primary job perspective is to make the layout for engaging and interactive web pages or applications to attract users.

The content of these web pages may vary from text to graphic. The web developers’ key role also extends to handling multiple functions related to the Web page’s working.

On the other hand, software developers deal with software solutions and application modifications to solve various computer application problems. They are also responsible for the frequent improvement and upgradation of the software to cater to the customers’ ever dynamic needs. Their job is confined to the system level of software development. The arena of the job for software developers concentrates on professional fields like industries, computing, and communication, Scientific researches, and many more.

Web Developers are bestowed with multiple responsibilities regarding the working of a website or application. They have to perform various crucial functions, like designing the page layout and collecting data. Their core task is to create engaging website content for the web platform that shall enhance the website’s performance and ensure its consistency. Closer scrutiny at the job roles of web developers sheds light on the following:-

These may be theoretically tagged as the web developer’s responsibility, but practically a single person can’t manage and coordinate so many aspects. Hence, the web developers’ job role is often segregated into numerous sections, and a specialist takes over each section. Let us have a look at the conventional categorization of Web Developers.

This is the first category of Web Developers. Back end developers concentrate on the technical aspects of the Web applications and websites. Their job roles are oriented along with creating web site architecture, database administration, composition, and user interface APIs. They make and regulate how the website will operate at the grassroot or fundamental technical level.

They deal with the user’s perspective. Front end developers are responsible for making the websites lucrative and easily accessible for the users. Their job scope includes the formatting of the websites so that even the laymen can use the websites. Another crucial role of the front-end developers is to ensure the website’s compatibility over a wide range of devices, browsers, and operating systems to widen the user base.

These are the real multitaskers, and their work includes management of both front end and back end responsibilities. The areas of importance for the full stack developers are:-

They mostly create software applications that are compatible to run on mobile devices and desktop. Examples of such applications can be games or tools. They primarily work on a single project for innumerable years to ensure that the application runs in the best possible way with a prolonged consistency.

Their role is to invent specific system-level software programs based on their knowledge of programming. Their work is quite precise and concentrates on a single type of industrial requirement. For example, they create a unique database management system software for a University that can easily manage students’ track records.

Because the job roles of Software developers and web developers are so overlapping, both professions’ skill set is also closely knitted. The necessary skills that remain more or less the same for both the disciplines are:

However, certain distinguishing skill sets are exclusive to each of these professions. They are:-

The critical skill set of software developers includes critical thinking. The development of software ultimately rests on solving a problem. There must be a particular problem that the people face and the software approaches to solve that. Finding the easiest to solve a problem is a mandatory skill for software developers. They must know how to tackle a problem in the most creative way. It is also imperative to think from the perspective of a user. Softwares are developed to interlink man with technology. Every detail of the software should be designed so that even the non-tech-savvy people can handle it easily.

As described above, the software developer’s prominent role is to develop an effective solution to the problem. Whence, the critical step of this work is to analyze the actual emerging situation and introspect deep into it to realize the exact cause. A software developer must understand the changing needs, dynamic behavioral patterns, and shifting paradigms of preferences in society. Your users will be the best judge of your software, and you need to dig deep into the user psychology.

The job of a software developer is often not isolated like a web developer. Web developers can just do their share of work and get away with it. Software developers, on the other hand, cannot do the same. As they are concerned with establishing the final product that will reach the users, they must collaborate with the other developers and the professionals to develop an effective software solution. Developers who can communicate well and convey their ideas in an appropriate format often stand out as successful software developers.

As far as the Web developers are concerned, they must possess the following essential skills irrespective of the type of website they are developing:-

The exclusive skill set of web developers include:-

Creativity is the core trait that a web developer must possess. Your website’s success primarily rests on how well you can place forth the information quickly and simplistically. A web developer must also be creative enough to represent the grand’s founding principles and core business goals through every minute detail of the website. Web developers often have to creatively fabricate every website component with the prevalent industry collaterals and the corporate world’s guidelines.

The more engaging your content is, the better is the user association with your website. After all, it is the content that is the king. A web developer must understand well and realize how to optimally use every bit of available content to make the website much more interactive, informative, and engaging. It is not always about too much content, but it is all about how lucidly you can place the content to maximize user attention and engagement. Web developers have to consistently make the website or the page rank in various search engines—experience handling multiple dedicated content management interfaces like WordPress.

Details make the difference. There are millions of websites on the web, but why is it that people will look into yours? It is the small intricacies that might seem insignificant to create all the difference. Micro factors like the usability and adaptability of the website or the ease of use and access make a lot of difference in a website’s reach and popularity. It is precisely where the web developer’s success lies.

Is it worth being a Web developer in 2021?
Yes, with the rise of the e-commerce industry and digital presence, there is an increasing demand for web developers skilled in website development and other related subjects. Due to the current pandemic, the demand for website development has received a boost with more businesses increasing their online presence and people preferring online shopping.

Is Web development a dying career?
With advancements in technology, web development is becoming easier than before. Templates and drag and drop features make it easy for even laymen to create websites. So, website development after a pandemic is not a dying but highly competitive career. It is necessary for a web developer to be highly innovative and have unique skill sets.

Do software developers need to know HTML?
Software developers mostly use programming languages like C++, Java, or Python. But certain jobs may need a knowledge of HTML or CSS knowledge. So, learning HTML would be an additional skill that could come in handy.

Is it hard to be a web developer?
Like any discipline , being a web developer requires focus and hard work. You need to be skilled in programming languages like HTML and CSS, know about testing, optimizing performance, and deployment. You also need to understand the clients’ specific requirements well.

Is HTML Worth Learning 2021?
Today, web development is not completely based on HTML alone. With websites getting more complex, you need to learn more advanced techniques. With HTML, you can be a front end developer, but by learning languages like Python, PHP, C++ you can be both a front end as well as a backend developer.

Is Web development a good career in future?
Yes, it is an excellent option. But, for a web developer to be successful and remain in the competition, he or she has to keep refreshing skills, be innovative, and develop outstanding skill-sets.

Are Web developers in demand?
Currently, website development has become easy for anyone to perform due to ready templates and drag and drop features. But, web developers who are very creative and have exceptional skills are always in demand. They can take care of hosting, security of the website and many other things.

Can a web developer create an app?
A web developer is mostly concerned with creating Web apps using HTML, CSS, and other programming languages. Developing mobile apps requires different kinds of skills and knowledge. Depending on the platform for which they are being made, you require the use of specific languages and Integrated Development Environments (IDE).

Why are Web developers paid so much?
Web developers are paid well because what they do is challenging. They have to be skilled in multiple languages and coordinate with third parties to develop a beautiful website. They know how to deal with customers, understand their requirements correctly, and convert that into code to get results.

Do web developers make good money?
Currently, web developers have a great demand in the job market and earn a decent income. But, their salaries are mostly not fixed, and they are usually paid on an hourly basis. So, earnings will depend on the number of projects available and the number of hours devoted to the work.

About Logicsofts: Logicsofts is one of the leading digital marketing agency that offers professional website design, digital marketing, mobile application development , SEO service and many other services at astoundingly affordable prices. Speak to our specialist for more information: +4402079935898

Abhay is a Digital Marketing Guru and an accomplished entrepreneur with an experience of a decade working with various businesses varying from startups to established brands. He co-founded many companies like Logicsofts, PrintYo, CrazyRise and more. He is passionate about SEO and Online Data Analytics, which plays a vital role in any business to grow and mutate as per the data results.
Follow me on LinkedIn, Facebook and Instagram